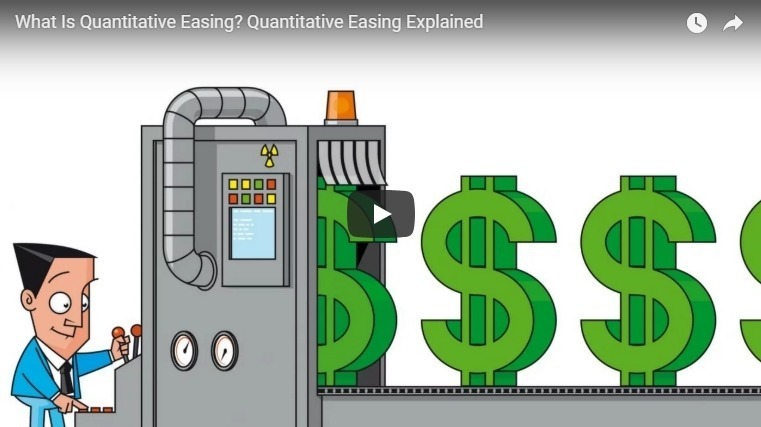 Quantitatvive easing, or QE as it is sometimes referred is based upon the principle that the government plays a large role in stimulating a struggling economy. Through Quantitative easing, money is printed by the central bank owned by the government, and then used to purchase bonds such as pension funds and banks. The effect this has is to lower interest rates which in turn promotes borrowing and deters people and business from keeping their money in the bank. Many argue that the effect this has on the economy is positive; the borrowing and lending that is promoted is supposed to increase the amount of money overall in the economy which contributes to more exchanges. Also QE is seen as a way of the government being able to affect the economy without directly intervening, so it is seen as a minimalist approach that appeals to both free market idealists and more socialist opinions. Issues with QE do arise however, as the increased amount of money being printed can cause a lot of inflation which causes money to lose value. This loss of value means prices rise faster than wages, meaning it’s harder for people to get by, and companies to employ people. Plus a currency’s loss of value makes it less appealing to trade with other countries, which affects both imports and exports. This is one of the many reasons why some people argue that QE or any form of government intervionism is bad for the economy, as they argue too much regulation stagnates the economy. What’s your opinion? Feel free to comment! Here is the transcript if you’re interested: Quantitative easing is based upon the principle that governments should provide assistance to their struggling economies by injecting money into them. Firstly. money is put into the economy via a central bank, owned by the government. The central bank would then stimulate the economy by buying bonds such as pension funds and banks The effect this has is that it allows more lending and borrowing for businesses and people, which in turn promotes economic growth. It also has the effect of lowering interest rates, deterring people from keeping money in their banks and encouraging them to spend and keep money flowing through the system. However the whole system is very delicate, if too m much money is put into the economy; inflation will cause prices to rise faster than wages leading to possible unemployment and an economic crash. Whereas if the government simply put no money into the economy, it could slow the economy to a stop and then deflation may occur. The overall effect of quantitative easing has shown to be positive; however to many free market idealists it is seen as an example of government interventionism. Because of its inflationary effects, Quantitative easing has also caused a great many currencies to lose value, and therefore make them make them less appealing to trade with other countries. So that’s the basics of quantitative easing, If you liked this video, then please subscribe and share. Thanks for watching.